Proulx Oil & Propane participates in Seacoast Skating with the Stars

PORTSMOUTH â€” With the help of professionals from Ice Dance International, local celebrities will be engaging in a friendly ice-skating competition at Labrie Family Skate at Puddle Dock Pond at Strawbery Banke Museum.

Donna Ryan, Anne Weidman, Tod Mott, Jim Proulx and Sean McGrimley have been working with the professionals since Monday to prepare for the event, which starts Saturday at 2 p.m.

Artistic Director Doug Webster said this is the first time for Seacoast Skating with the Stars, which will follow the format of ABC's "Dancing with the Stars." Each local Portsmouth-area "star" is paired with a professional skater to perform a 90-second routine. 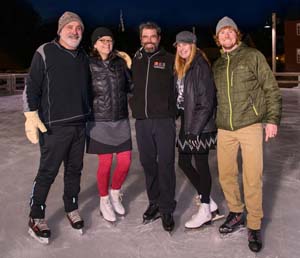 Donna Ryan of Kittery, Maine, is a partner in the Pepperell Cove Development; Anne Weidman of Portsmouth, is on the board of trustees at Strawbery Banke; Tod Mott of South Berwick, Maine, is co-founder of Tributary Brewing Co.; Jim Proulx is the owner of Proulx Oil & Propane in Newmarket; and Sean McGrimley is the physical education teacher at Little Harbour School in Portsmouth.

Webster said they started planning for the show in August of last year, and the local celebrities have been training with him since December. They all have experience on the ice, but not all of them have figure skated.

"The primary focus for me is the joy of skating," Webster said. "It will be really wonderful to see the guys in their hockey skates. They've been so committed to this program."

Webster has been involved with the ice rink at Strawbery Banke since its inception. This is the fifth time they have had a winter performance, but the first time for the collaborative Seacoast Skating with the Stars.

The competition has drawn some big-name judges, including JoJo Starbuck, Sheryl Franks and Elin Schran.

Starbuck is a three-time United States pair skating champion and two-time Olympian, having competed in 1968 and 1972. In 1972, she and partner Kenneth Shelley placed fourth in the Olympics.

"I'm blown away by the bravery of the new skating stars," Starbuck said about the local slate of skaters.

Starbuck said getting down basic turns and interpreting the music can be overwhelming for people who have never competed in public.

Franks, who paired with Michael Botticelli to place seventh in the 1980 Olympics, and Elin Schran, founder of Joy Skate Productions and innovator of IceFlow, said people of all ages can benefit from the joy of figure skating.

Schran said the competitors will have an additional challenge because they will be outside on the rink at Puddle Dock Pond, where wind and air temperature can affect performances. Schran's advice for the competitors is to stay focused â€” and try to smile.

Webster said after the competition, the Ice Dance International troupe will be performing.

For Saturday's event, tickets are $15 per adult, $10 per child and $40 for a family. Fees include rink-side viewing and after-show skating. VIP tickets, with a meet and greet, are $22 per adult and $18 per child. For tickets, visit Strawbery Banke Museum web site.